Posted on 13 August, 2013 by TollgatePrograms

It was chicken day at camp today and we played with our feathered friends and ate like them.

We met some chickens and learned about the pecking order. Our leaders showed us what they eat and how each food helps them. 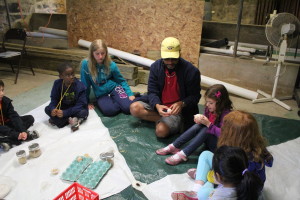 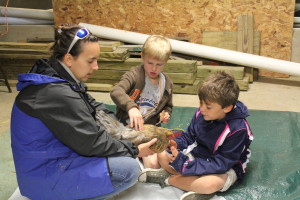 We spent more time learning about eggs and identifying the parts inside. There is the germinal disk which is where the chicken develops inside the egg. The chalaza is the part that holds the egg in place inside the shell. The yolk feeds the chick as it develops and the albumen serves as a cushion fluid to protect the chick. 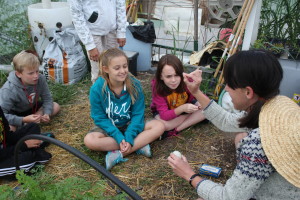 Ms. Mandy peels off a part of the shell to show how thin it is but is still protective to the chick.

In Garden Kitchen we used eggs to make a delicious omelet! We added spinach, onions, and tomatoes to make it extra tasty. 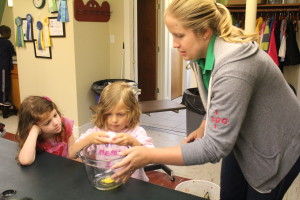 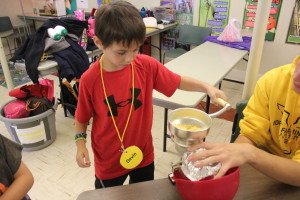 A Yellow Pepper grinds the corn for the afternoon Garden Kitchen snack. 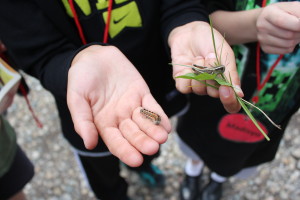 The Red Pepper’s grasshopper and caterpillar. 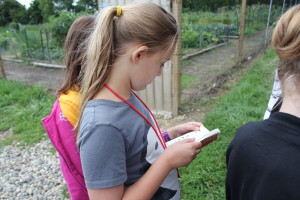 The Red Peppers identify their bugs. 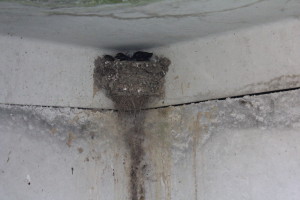 The Orange Peppers found baby birds in a nest.

Some of us got to build nests to test how birds can keep their eggs safe. We used grass and mud to create them. 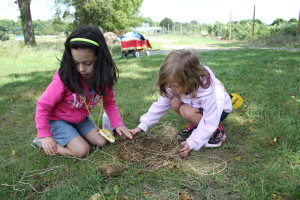 In Garden Kitchen we used our ground corn from the morning to make cornbread. While the cornbread was cooking we used heavy cream to make butter. It was so fun to shake the jar to make the butter! 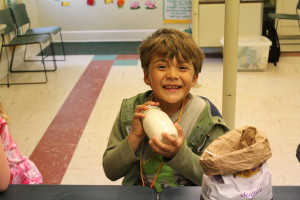 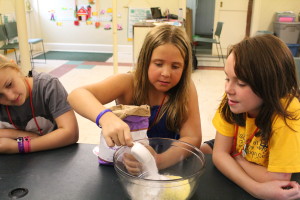 Red Peppers mix their ingredients for their cornbread.

I’ll see you all tomorrow for livestock day!

Crack 6 eggs into small bowl and whisk until scrambled.

Cut onion and roughly chop, then add to food processor.

Wash and dry tomato, then chop into small pieces.

Brush the inside of the baking dish with olive oil.

Gently pour the egg mixture into the dish and bake at 350 degrees for 10 minutes or until firm.

Sprinkle the top of the omelet with mozzarella cheese and return to the oven until melted.

(Extra butter for coating inside of baking dish)

Coat inside of 8-by-8 inch baking dish with butter.

Whisk together the cornmeal, sugar, baking powder, and salt in large bowl.

In a separate bowl, whisk together the milk and eggs until the eggs are broken up.

Pour the liquid mixture into the cornmeal mixture and fold until incorporated.

Stir in the melted butter until just incorporated and no streaks of butter remain.

Pour the mixture into the baking dish and bake until golden brown, 20 to 25 minutes.

Pour heavy cream into small glass jar (headspace should be at least 2 inches).

This entry was posted in Camp Blog, Summer Camp, Uncategorized. Bookmark the permalink.