Good afternoon, everyone! I hope everyone enjoyed their first day of camp as much as I did. Since today was garden day I, Libby the Ladybug, will be reporting from the garden!

The Green Peppers started their day off in the garden kitchen making bean dip and homemade pita chips. But before anyone got to start you all learned a cool hand-washing rap. 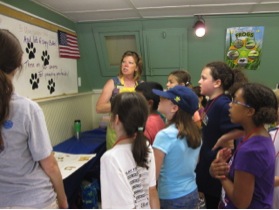 Now that everyone’s hands are clean we get to prepare the food! The little peppers started by mixing up the toppings for the pita bread so Ms. Kayla could put it in the oven. While the pita bread was cooking, Ms. Kathe and Ms. Kayla helped the peppers chop up their corn, onions, and tomatoes so they could add them to the beans. After the dip was ready, the peppers learned about composting from Ms. Rachel while they waited for their pita chips to be done. 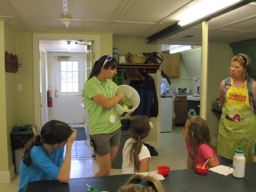 Ms. Rachel teaches the Green Peppers the importance of composting. 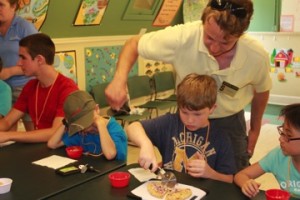 Liam learns how to safely cut up pita chips

Next we went for our hayride out to the field to play icebreakers and the peppers proudly displayed their flags that they made when they first arrived. 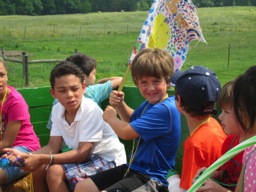 We learned about the air and how it gets trapped under the parachute to make a BIG bubble over everyone. 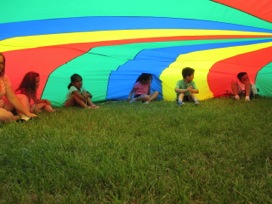 We even played another game called People-to-People where we paired up and one person made the rest of the group do silly things! 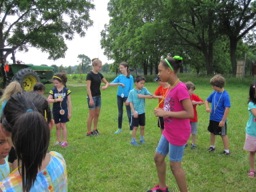 After the hayride it was time to eat lunch and hang out with all our new friends we made. 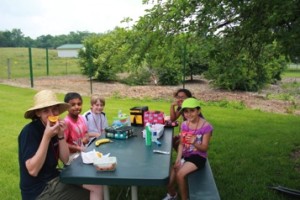 Ms. Mandy is so silly!

After lunch we had music time with Ms. Lauren and we learned fun songs about plants and rain. One song Ms. Lauren taught the peppers was called oats, peas, beans, and barley. The peppers had a great time singing along as she played her ukulele. 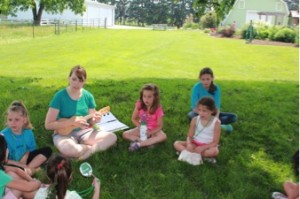 The Children’s Garden is full of cool plants that I love to spend time on! During the scavenger hunt the peppers got to explore the garden and learn about the unique plants that are in it. They got to smell plants that smelled like lemons, limes, and popcorn. 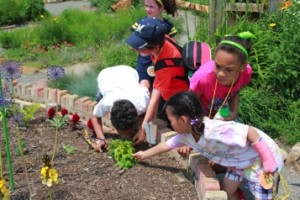 It was finally the best time of the day! When all the peppers got to come out to the garden and plant corn with me, Libby the Ladybug. The peppers picked their seeds then planted and watered them so they can grow big and tall. 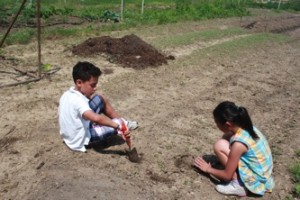 For the afternoon garden kitchen snack the peppers got to make a rainbow salad complete with different fruits and veggies. Everyone was so good about making sure to try all the different ingredients. Some peppers even found out that they liked some new things! 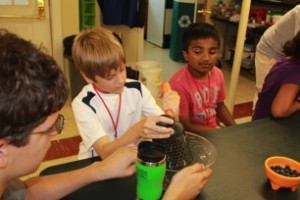 Evan grates a carrot for the Rainbow Salad

Today was an extra special day at camp because it was Ms. Sarah’s birthday. So before everyone left we sat down and sang happy birthday while we enjoyed some chilly popsicles. 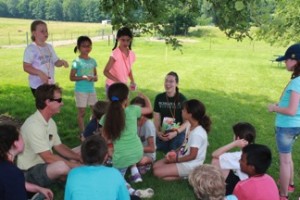 I hope everyone is excited for chicken day tomorrow! So make sure you get a good night’s rest so you’re ready to have lots of fun tomorrow!

Homemade Pita Chips
For the pita chips, brush some pita rounds with olive oil & spices, sprinkle on sea salt, slice, and bake for 10 minutes.
for the chips:
4 whole wheat pita rounds
1/2 c olive oil
1/4 tsp garlic
1/4 tsp ground black pepper
1/8 tsp oregano
sea salt, to taste
-brush for the oil
-toaster oven
-knife to slice the pita rounds
To make the chips: Mix olive oil and spices. Brush on pita rounds and sprinkle on sea salt. Slice each pita round into 12 pieces and arrange on baking sheet. Bake at 350˚ for 10 minutes. Halfway through flip chips over.

Blend ingredients in a blender until smooth – drink up!!